Celebrating the Golden Age of Skiing

For over 50 years, John Jay presented his unique films to audiences across the globe - in person, with live narration. He entertained tens of thousands with his wry yankee humor, keen eye and enthusiasm for the great sport of skiing.

Widely regarded as the "father" of the ski film in its modern form, John was particularly adept at filming from a pair of fast-moving skis. From the 1930's to the 1980's he recorded the rise of skiing to a sport that is enjoyed by millions.

John's films remain today a cherished memory for many who were fortunate to have attended a live screening. Now you can relive the Golden Age of Skiing and share the humor and history that is a John Jay ski film.

Jay had the honor to receive the Lifetime "Jerry," the Crested Butte International Ski Film Festival Ski Film Maker Legend Award, in January of 1996. In 1997 Jay received his greatest honor, the Lifetime Achievement Award from the International Ski History Association. Recognizing him for his outstanding record at preserving the history of skiing, the association introduced Jay as a "towering figure in the history of skiing who effectively communicates, records, and popularizes his love of the skiing life to countless thousands with his ski films."

About that skier in red pictured above...

Yes, that is the legendary Stein Ericksen shown at the top-right of this page, photographed by John Jay skiing on Mt. Cook in New Zealand. 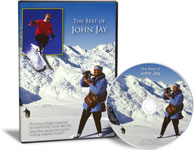 The Best of John Jay begins in picturesque Taos, New Mexico in the Sangre de Cristo Mountain Range. John continues on a laugh a minute jaunt through Vail and Aspen, Colorado, Klosters and Zermatt, Switzerland, Japan, Sun Valley, Idaho, Mount Snow, Vermont, Persia, and New Zealand. Highlights include a daring race on an avalanche slope by world champion skier Helli Lantschner as well as a camel safari to ski the Atlas Mountains in Africa. 80 minutes.

I gave my first show in the Los Angeles area in the summer of 1940 - to about 65 persons assembled on a friend's tennis court in Pasadena. It was a hot and cloudless August night, and as I remember it, a gigantic Southern California moon gave me some pretty stiff competition. During the first reel, it shone on the screen and washed out the snow scenes until they resembled a weary skier's mirage. When I reversed my field in the second reel, the moon sunk a bit lower, and now shone directly in my audience's eyes, successfully blinding nearly all of them, except for two, who were asleep. One was the operator...